Northbridge Cricket Club, entering our 103rd season, are on the look-out for some new players to join our ranks.

We currently field 5 teams in the Northern Cricket Union competition – the strongest community cricket competition outside of Premier/Grade and Shires cricket in Sydney. We have 2 turf sides, and 3 astro-turf sides, with all teams looking for some new recruits – we cater for all types of cricketer and their skill level, from the beginner to the local legend.

More importantly, we are looking for some good quality people that we can enjoy our Saturdays (and at times Saturday evenings!) with.

We completely understand that you might not want to commit to a game every week – that’s cool, we can cater for that. The world is a pretty different place right now, and we just want to be a place where we can make cricket work for you, from a casual hit to something more serious.

For a bit of background on us, feel free to have a read of this Peter FitzSimons column earlier in the year that give you a hint of what our great club is about: Sydney Morning Herald

If you are keen for a hit, or even just to chat about the club or the game (or even have a beer at our sponsor pub North Sydney Hotel), send us a message on Facebook or an email at executive@northbridgecricketclub.org, or register here

This is notice of that the Northbridge Cricket Club will hold its Annual General Meeting on Wednesday, 21st August 2019 – 7:00pm @ Billy Barry’s Hotel in North Sydney.

We hope to see many members and life members there to help shape your club for 2019-20 season.

The Annual Presentation Night has been set for 11th May, 2019! For all the details of the evening, and to purchase your ticket for this grand event, hit the link up on the left side of the site, or alternatively head to: http://www.northbridgecricketclub.org/100th-annual-presentation-night/ 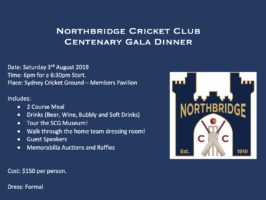 To celebrate the occasion, we put the call out for anyone within the Northbridge CC community over the years to tell us their stories of the club. 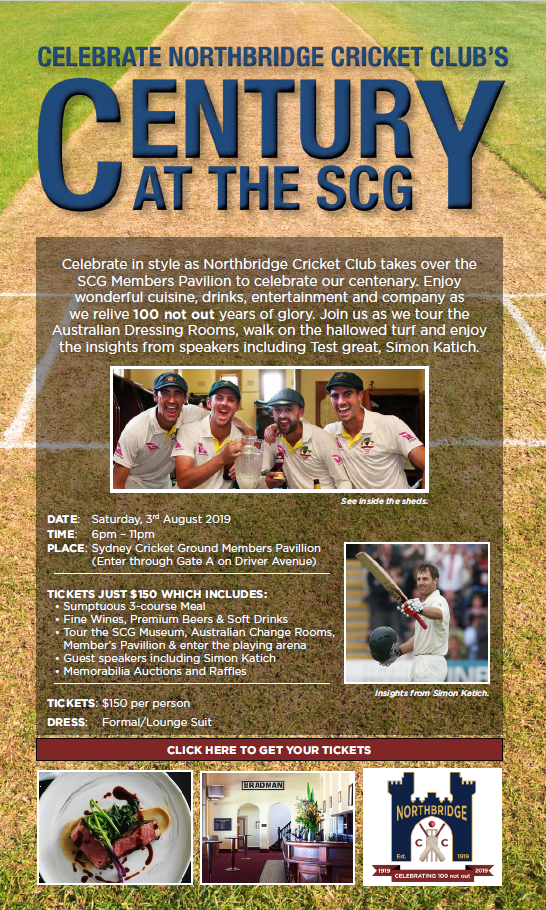 Ticket sales for the event are now close. If you missed out and are still keen, fill out the form below and we’ll get back to you if we can get you on a table.

We are welcoming on board BPM Financial as a new sponsor for our Centenary Season!

BPM Financial is a boutique financial planning business that provides tailored counsel to people who wish to build a secure financial future. We assist individuals who are looking to maximise their financial potential, effectively prepare for retirement, protect their existing wealth or structure their affairs following a significant life event.

If you are looking for financial planning, then get in touch with Ben – see their website www.bpmfinancial.com.au for more details.

We are delighted to welcome on board Kingsgrove Sports North Shore as our apparel provider for our centenary season. This year will see paid members get new playing shirts, training shirts and caps, all with the our fantastic new logo! Part of this partnership will see all Northbridge members eligible to receive a 5% discount on purchases* in store at Kingsgrove store in Artarmon

So if you are in need of new kit for the upcoming season, get on down to Kingsgrove Artarmon (https://www.kingsgrovesports.com.au/artarmon-store)

(* Excludes ball purchases).
Welcome to the Centenary of the ‘Bridge! Season 2018/19 represents the 100th year of Northbridge Cricket Club, and we would be delighted to have everyone who played with us last season, or those in seasons gone by, to register to play with the ‘Bridge again in what will be an epic season of cricket! Last season saw us field 6 teams in the NSCA competition, where we were the biggest club in the area so hopefully we can continue to grow again in our centenary season.

Player Registrations
The page to register your information is online at here so get your details in there to get onto our club list for 2018/19. Even if you have the same details as last year, filling the form out is the indication that you are keen to run around again, as well as some important questions about playing kit as we look to celebrate the centenary in style!


Pre-Season Training
The first of our pre-season training sessions will commence on Sunday 19th August, at the Naremburn Lower Nets from 12pm until 2pm. This is the chance to dust off the kit and roll the arm over, with those sessions continuing each Sunday through to the 16th of September, with the session on 23rd September modified for a later start time of 1pm – 3pm.


We are hoping to start mid-week training early September, but are waiting to hear back about venu availability. Either way, get along to a training session, or all of them and have a run before the season starts in earnest.


NSCA Changes
In the 2018/19 season, the NSCA will be combining all synthetic grades with the NDCA to run under the NCU banner. This is not a merger, all the NSCA is doing is playing all grades under that banner to try and expand/improve on the synthetic cricket and have more teams/variety of competition. This should mean our D Grade sides from last year are not forced into 1-day only competition, and is a good result for our association moving forward.


Welcome Executive & Committee
Welcome again to our Executive and Committee members for the 2018/19 season. This is a big one for us, generally get one centenary in a lifetime so I welcome our volunteers who help to keep the club running behind the scenes. In saying that, if you have ideas on the sorts of things we can do for our centenary, fundraising ideas, sponsors etc then let us know.


So that’s all we have to update on for the moment, register your interest in playing for the ‘Bridge in our Centenary season, and I look forward to seeing you all throughout what will hopefully be another successful season for the ‘Bridge!

This is notice of that the Northbridge Cricket Club will hold its Annual General Meeting on Wednesday, 25th July 2018 – 7:00pm @ Billy Barry’s Hotel in North Sydney.

We hope to see many members and life members there to help shape your club for 2018-19 which of course will be our 100th year as a club. 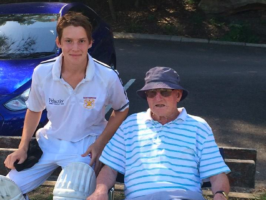 Today we have received the news that Tim Perry, a Northbridge CC legend, Life Member, president, vice president and club patron, not to mention the player who has taken the most ever wickets for Northbridge as a club in it’s 99 year history, passed away on the 20th December 2017 at the age of 87. 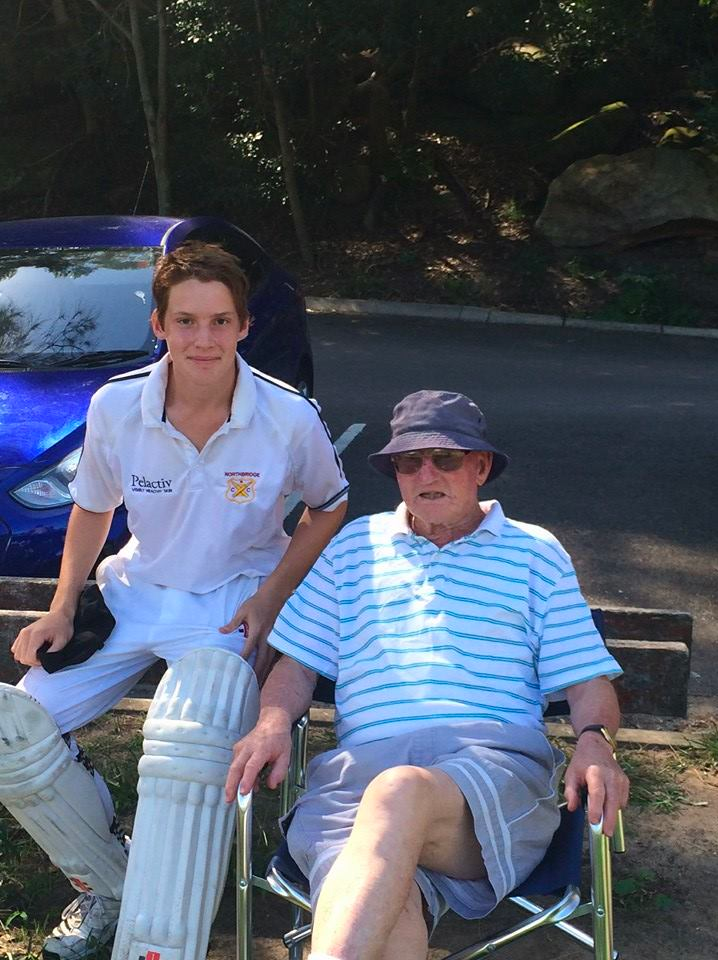 Season 2017-18 is fast approaching, and this season we are looking at entering up to 6 teams in the NSCA and NCU competitions. Northbridge is the oldest (and best!) club in the NSCA, and this is our 99th season which will see is return as the largest club in the association. We cater for players of all levels, with teams in the Turf competition and Hybrid (1 and 2 day matches) competitions. We encourage socialisation between grades, with players known to have started in the lower grades finishing the season in the top grade whilst also making life long friendships along the way.

We have access to one of the best training facilities, though not on the north shore but at Sydney Boys High, where you can roll the arm over or even spend time on having a dig against a bowling machine. With qualified coaches on our books we can help get you the improvement in your cricket that you need to progress up the grades. Training occurs on Wednesday evenings from 7:30-9:30pm.

After each match players gather at our sponsors establishment, Billy Barry’s Hotel, for a few beverages and sometimes a meal where players can describe to each other the events of the days play.

So what are you doing? Register now, and one of our friendly members will be in touch with you as soon as possible!